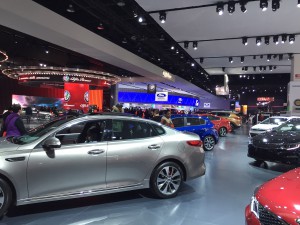 I will build a car for the great multitude. It will be large enough for the family, but small enough for the individual to run and care for.  It will be constructed of the best materials, by the best men to be hired, after the simplest designs that modern engineering can devise.  But it will be so low in price that no man making a good salary will be unable to own one.  – Henry Ford

If you want to see how far the auto manufacturers have come in building a car for the multitude, for the family, and for the individual – you have to visit an auto show like the North American International Auto Show (NAIAS) being held from Saturday, January 16 to Sunday, January 24 in Detroit, Michigan.  The sites, the sounds, and the colors – and oh my those colors!

There is no main season for auto shows since they are pretty much held 52 weeks a year all over the world.  The following is a list of the big name shows held around the globe.  But, let’s be honest, many of us do not live close enough to these awesome places so if you do not see your city’s name on the list, you should be able to do a web search and most likely find a show pretty close to you.

Open to the Public:  Thursday, March 3 to Sunday, March 13

Open to the Public:  Monday, April 25 to Wednesday, May 4

Open to the Public:  Friday, August 26 to Sunday, September 4

A Quote to Make Your Day

People who are crazy enough to think they can change the world, are the ones who do.
- Steve Jobs