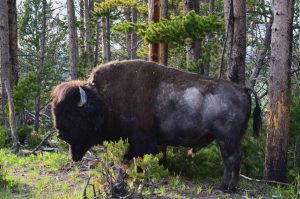 A Bison near Old Faithful in Yellowstone National Park

The story of the American Bison is woven into the fabric of the United States.  Known by the Lakota Indians as “Tatanka,” bison were a source of food and clothing to the Plains Indians.  Bison were also an integral part of many Indian ceremonies and customs. 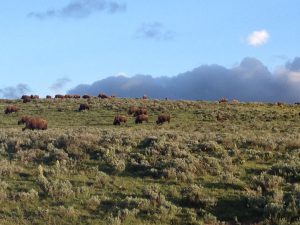 Bison have also been knitted into many other areas of the American experience.  For example, the image of a bison is depicted on two U.S. State flags (Kansas and Wyoming).  And three U.S. States have the bison as their official mammal (Kansas, Oklahoma, and Wyoming).  The bison is on the seal of the Department of the Interior and the National Park Service.  And let’s not forget about the numerous sports teams and organizations that have the bison as a mascot.

An item that should be on everyone’s Bucket List is seeing an American Bison roaming freely in the wild.  Once you see a bison out in the open you will understand why they are treated with such reverence.  Their gravity, their majesty, their perceived power and perceived gentleness all rolled up into this massive creature.  When you see bison for the first time you really are Living a Memory.

Over the years I have had opportunities to see American Bison in many places and here are my three favorites. 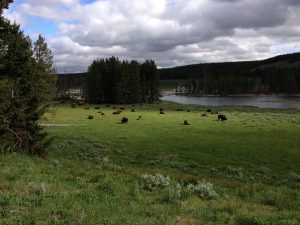 The mountains, the geysers, the bison – Yellowstone National Park has it all!  Nearly 5,000 bison call Yellowstone National Park home and this gives you many many opportunities to see bison in the wild.  Lamar Valley in the northern part of the park and Hayden Valley in the central part of the park offer the best opportunities to see bison.  Also, bison often roam in the Upper Geyser Basin which is home to Old Faithful.  Since Yellowstone gives you such an incredible opportunity to see bison you need to be even more careful.  These awesome creatures may look docile, but they can weigh more than 2,000 pounds, can stand more than 6 feet tall, and can run at almost 40 miles an hour – so if they run towards a person that person is in big time trouble! 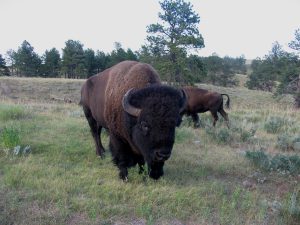 A Bison on a hillside in Custer State Park

Custer State Park is a 71,000 acre slice of stunning topography in the Black Hills of South Dakota!  Located just to the south of Mount Rushmore and just to the north of Wind Cave National Park, this little slice of heaven is home to 1,300 bison!  As you slowly meander along Wildlife Loop Road you may see bison in about any direction.  And please do not go too fast – an entire herd might just be blocking the road! 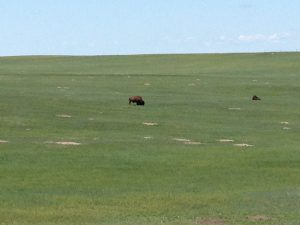 Bison on the prairie in Badlands National Park

Seeing bison in Badlands National Park is like watching a live version of the movie, “Dances with Wolves.”  Well, as it turns out, quite a few scenes from the movie were filmed in Badlands National Park!  And they filmed in the area with the best chances to see bison – the Sage Creek Wilderness Area.  There are about 500 to 1,000 bison in the Badlands and seeing them in the Sage Creek area will make you feel like you have stepped back into the 1800’s.  So, take your time driving along the Badlands Loop Road and the Sage Creek Rim Road and enjoy the buttes, the prairie, and the bison! 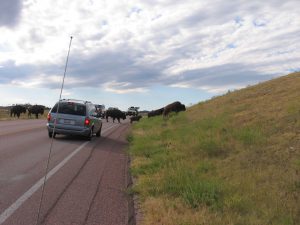 We hope this information about great places to see bison was helpful and inspires you to get on the road and enjoy the bounty that the western part of the U.S. has to offer.  In addition to Yellowstone, Custer State Park, and the Badlands, we have also enjoyed bison at Wind Cave National Park in South Dakota as well as Theodore Roosevelt National Park in North Dakota – but these three are our favorites.  Let us know how your planning is going and how your visit was by sending an email to liveamemory@gmail.com.

Have a great trip and Live a Memory! 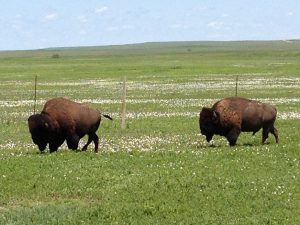 A Quote to Make Your Day

People who are crazy enough to think they can change the world, are the ones who do.
- Steve Jobs